Sedro-Woolley Iron Works (SWIW), which later evolved into Skagit Steel & Iron Works, was a humble venture when it was launched by John G. Anderson in 1902. Anderson had but a small one-building shop equipped with a planer, drill press, lathe and refining furnace to serve the fledgling local lumber and mining industries.

Sedro-Woolley Iron Works (SWIW) quickly made a name for itself, largely from one of Anderson’s first employees, a former ironworker and machinist named David G. McIntyre. McIntyre was a tireless worker with a boyhood dream of operating a steel and iron plant. To drum up new business for SWIW, McIntyre visited logging camps, and repaired locomotives. Sedro-Woolley Iron Works achieved a quick reputation as the best shop in northwest Washington for blacksmithing, forging and repair jobs.

McIntyre bought his first stock in the company in 1906. In 1907, his 14-year-old son, Sydney, began working at the plant during summer break from school. The plant would later start a high school apprentice program that became a national model.

When Sydney began his apprenticeship, his father’s dream of ownership was now just a few years from becoming a reality. Young Sydney would come to play a big part in the future success of SWIW and Skagit Steel & Iron Works, the name SWIW received in 1914. Sydney’s creative mechanical designs and adaptations would come to earn him worldwide esteem.

By 1918, when David McIntyre had realized his dream and acquired ownership of the plant and business, Skagit Steel & Iron Works had grown to become the largest plant of its kind north of Everett. SSIW continued to boom through the World War thanks to military equipment manufacturing contracts with the U.S. government. 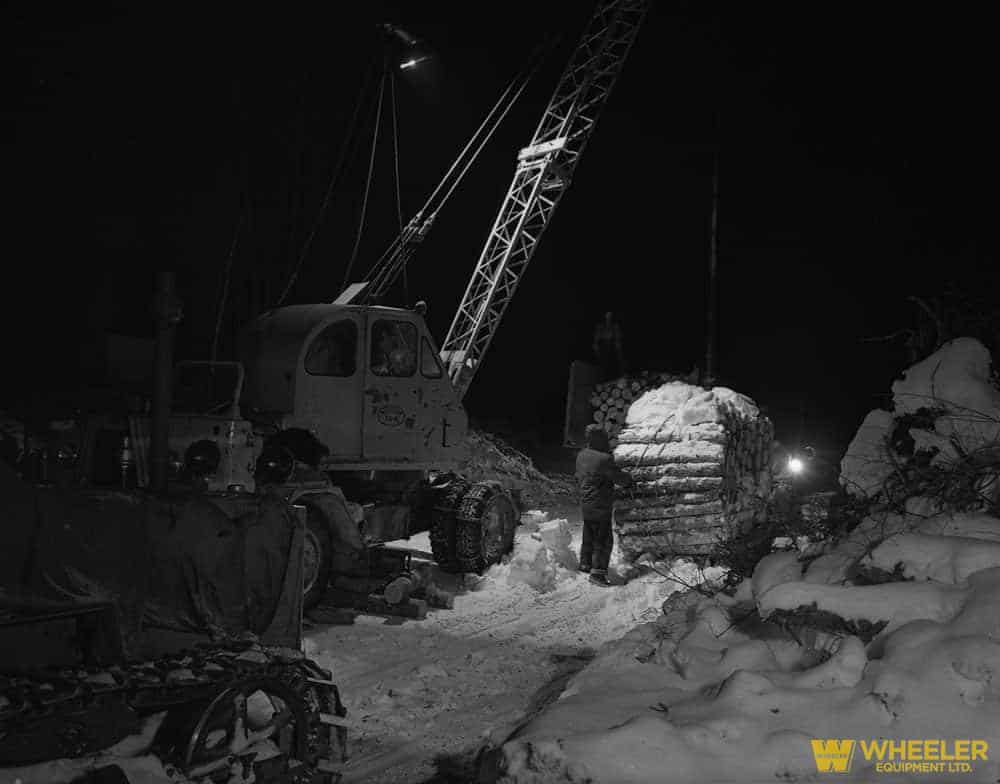 The Depression years hit the company hard, but crews producing lumber for housing still needed equipment. Sydney McIntyre’s “M.A.C.” train engines, hoists and other equipment filled the need– and kept workers on the payroll. SSIW was enjoying a significant upswing by the late 1930s. In the days of steam, Skagit Steel & Iron Works would become a pioneer in gasoline-powered engines.

When the U.S. entered WWII, SSIW’s yarders and loaders were put to work for lumber for the war effort. SSIW never stopped making forestry equipment but by the 1930s and 40s, Skagit Steel & Iron Works was designing and building equipment as diverse as anchor winches for coast guard icebreakers and screw shafts for B-29 bombers. Who would have imagined these things in that first one-building shop back in 1906?

Skagit Steel & Iron Works’ contract with the military continued into the 1950s. In 1953, Skagit won a contract to make rifle shells for the Army and its plant in Sedro-Woolley again expanded. Skagit Steel & Iron Works reorganized and changed its name to Skagit Corporation in 1962. Even with its diverse line of products, logging equipment was still being manufactured.

1969 marked the end of the McIntyre era, as the long-time family-owned business became a subsidiary of the Bendix Corporation. At that time, Bendix was primarily a manufacturer of heavy machinery for the offshore, marine, construction, and logging industries. It was a focus that matched what had become the focus of Skagit Steel & Ironworks’ own.

Sadly, Bendix lost its identity, gradually becoming lost in sea of corporate mergers in from the 1970s through 1990s. It finally ceased to exist after the sell-off of the last Bendix brand, its commercial vehicle brake business. It turns out much of Skagit’s equipment has outlasted all those corporate mergers. Even after decades of rugged use, you’ll still find plenty Skagit yarders hard at work.

EVERY NUT, EVERY BOLT – WE FIX EVERYTHING!